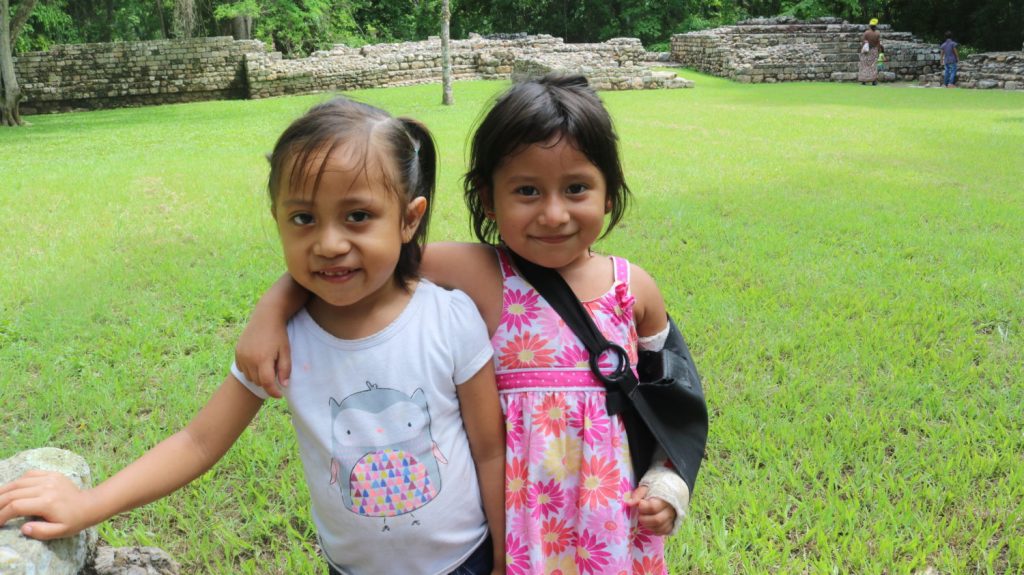 Children play, learn, eat, sleep, play again and at some point they also break a bone (or two!). Breaking a bone can be as normal as getting chicken pox, with the difference that if it’s not treated correctly, it can cause permanent damage. Follow me with the story of Deylin’s broken bone.

Deylin Marisol arrived at Casita three years ago when she was just two years old. She was underweight and lethargic, but quickly started to change at Casita. Now she is a bright, energetic 5 year old with a big personality. The youngest in her family, Deylin has two older brothers at Casita, and another older brother at home.

It was a regular day in June of 2016 and Deylin was at Casita playing libre, the Honduran version of tag. When she was chasing one of her friends, in an attempt to tag him “it”, she fell on the floor and be
nt her arm. “Ouch, my arm,” she yelled. Deylin was very brave – only a few tears rolled down her face – but we could tell by the swelling and the shape of her elbow that it was either sprained or broken.

Since there is no such thing as an urgent care center in Copan Ruinas, we took her to a local health center, which only provides basic services. The doctor said she needed an X-ray, which meant driving more than an hour to La Entrada. And if it was broken, she would need to go to the hospital to get it treated.

At first, Deylin’s mom didn’t want to take her to the hospital. She would have to call off work which meant she would most likely lose her job, and besides, in the village where she grew up, injuries like broken bones were treated by local healers. She insisted that Deylin just needed a local massage therapist to work out the pain and that she would get better on her own.

After explaining the consequences of leaving the injury untreated, we convinced Deylin’s mom to let us take care of her treatment. We accompanied Deylin and her mother to La Entrada, where the X-ray showed that she had a double fracture. Deylin didn’t just need a cast, she would need surgery. This meant a trip to the nearest hospital in  Santa Rosa – a three hour trek via public transportation.

The next day, we went to Santa Rosa, but the doctor was too busy to do the surgery. We drove for more than four hours for nothing. It was clear that Deylin was in serious pain, but she was a trooper, cracking jokes in the back of the car to keep our spirits up. We tried again the next day (leaving Copan Ruinas at 4 in the morning) and this time we were successful. The doctor was prompt and efficient and within a few hours, after the anaesthesia wore off, Deylin was her old self again – making faces, playing on her mom’s phone, and chatting to all the nurses. She proudly showed off her cast to all of her friends at Casita when she got back.

After missing three days of work, Deylin’s mom was fired from her job. She would now be responsible for caring for her four children without an income. Now it was understable why she considered taking her daughter to a local “healer,” but she was grateful that Deylin was safe.

People with limited resources in Copan – like Deylin’s mother – usually don’t go to the doctor. Instead, they visit a “healer”, a person that gives them medical solutions without a title or any formal medical education. We want to prevent that. That’s why we launched CasitaCare – an initiative designed to boost medical services and health for mothers and children, improve water sanitation, hygiene, food security, and emergency response. We believe that small ideas lead to great improvements.

Deylin had her cast removed several weeks later and her arm is just like new. Without the help of Casita, her mom would not have taken her to the hospital and this could have turned into a permanent disability. Today Deylin can tell a different story, a story with a happy ending.

Please help us keep taking care of children like Deylin, through prevention and medical assistance when needed. Donate now and help Casita families have a happier life!