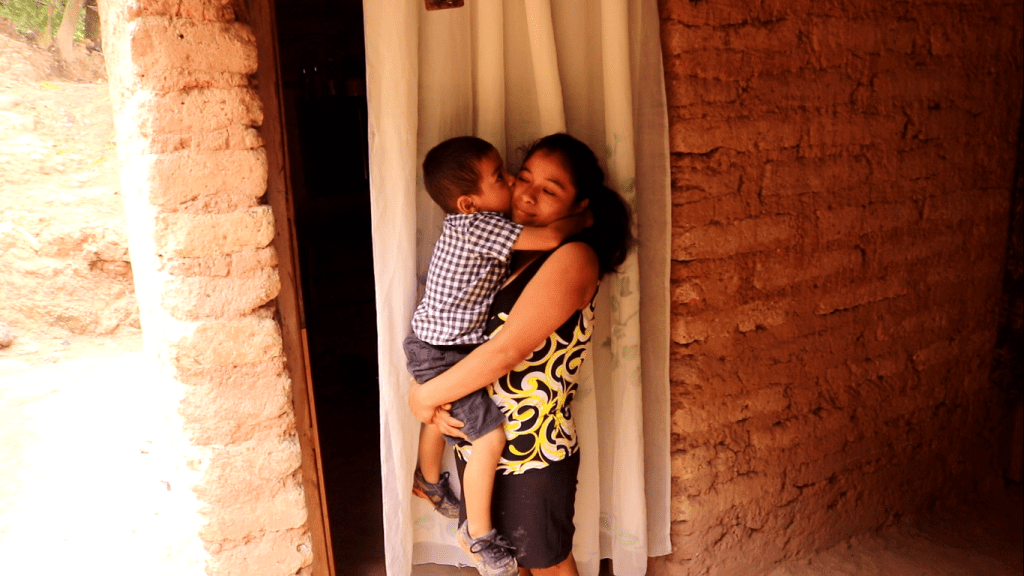 Through dirt roads and untamed weeds, Aura treks down a mountain to get to work in Copán Ruinas. Already, the walk is long, and holding the hand of her three-year-old son, David, doesn’t make it any easier due to his relentless curiosity. Every so often, they take a break for her to carry him. All in all, it takes an hour to make it downtown and then an hour-and-a-half to return up the mountain. Every day, she makes this trip, rain or shine, even when the water turns the steep path into dangerous mud.

This mother-son duo is the newest addition to the Casita Copán family, and we are so excited for them to be joining us! Meeting them for the first time, you would never guess all that they have been through. Aura is usually beaming with a sincere smile; and David is a loving, bright little boy.

Currently, Aura has a job as a domestic worker, where she earns $100 a month. Since this is not enough to make ends meet, she has to work part time at a super market, helping to bag grains. This means that, in order to support her son, she works 10 hour days doing physical labor, in addition to walking between two or three hours daily, up and down an unpaved mountain while wearing sandals – the only shoes she can afford.

She had David when she was 23 years old, and she moved in with his father and his family. His family was abusive of her, and when she could not take it anymore, she decided to pack up and leave with her only son. She has not heard from the son’s father since.

This was not the first time Aura had to make the difficult choice of leaving. When she was fifteen, her mother sent her to her very first job as a domestic worker, to a local business-owning family. For young Aura, this was an exciting opportunity to get out of the house and learn. Her mother entrusted her employers to take care of her, and teach her some valuable skills. Unfortunately, as so often happens in this country, she ended up being exploited and abused by her bosses, a married couple.

“[The husband] did things to me and I never knew what I did to deserve them…I did not press charges because I did not know you could press charges on a person like that. I wanted to talk to his wife, but she said no. She sanctified him”- Aura told us.

When she finally decided to leave, the wife intimidated her into staying for another month. They even threatened to send her to juvenile prison, for not obeying them. Finally, Aura decided to stand her ground, and decided to quit. They did not pay her last monthly wages, but to Aura, did this not matter. She was finally free.

Currently, Aura is living in a modest, half-built house with her mom, sister, and the latter’s three children. Aura shares a small bedroom with David, and uses the common areas of the kitchen and the bathroom along with the rest of her family. They have been working to build that house for years, and they are paying a sizable loan for the tin-roof they installed. They are on the second year of a four-year payment plan. If they miss their payments, they could lose what they have built so far, along with the small patch of land inherited by their father.

In 2013, tragedy struck the family when a hurricane blew off the tin roof, and they had to take another loan to fix it.  Because all her siblings already had so many debts, Aura agreed to take this last one out on her name. While her mother and siblings are paying this, the debt is still hers. This adds another uncertainty into her life; if her family cannot make the payments, she will be stuck with this debt indefinitely.

While Aura has endured so much in her young life, she is always looking at the bright side of life. She is so happy that her son is enrolled in our daycare program – Casita takes care of David while Aura works. She has had many people do her wrong over the years, yet, she does not harbor any resentment.

By supporting Casita Copán during this holiday season, you can make Aura’s wish come true: to make her son proud. You can donate today to honor all the parents like her who work so hard to provide for their kids. Or you can browse our gift catalog, to give truly meaningful presents to your friends and family. A small wish granted today can mean a big change in Aura’s and David’s future!