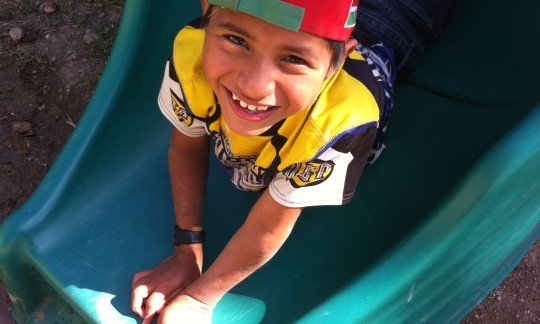 A New Home for Jairo

I am thrilled to share the news that we have welcomed our newest child to Casita – a little boy named Jairo. The story of Jairo is particularly special because we have helped reunite him with his grandmother and his sister and he now has a home to live in.

Jairo has spent much of his childhood at the orphanage. That’s where I met him two years ago. Jairo immediately struck me as intelligent beyond his years; a quiet, patient boy who always looked out for the smaller kids when there was no one around to take care of them. It wasn’t until recently that I learned Jairo still had family in Copán. His mother left years ago, leaving her two children behind with their grandmother. It was with deep sadness and guilt that Jairo’s grandmother took him to the orphanage. She didn’t have enough money to care for two children, and she only meant to leave him there temporarily. Things didn’t get better economically, so Jairo learned to make the best of living at the orphanage.

But it wasn’t easy. The conditions were worse than poor – the place was filthy, staff was few and far between, the food was always the same, the water was dirty, and as one of the oldest children (8 or 9 years old; I’m waiting to get his birth certificate so we can find out his exact age), Jairo got stuck with a lot of the work. Between schoolwork, Jairo had to carry the milk and transport the tortillas, and he and another girl were responsible for cleaning the scraps of fabric that they used as diapers for the babies. Jairo still has a big scar from where he was beat with a piece of a pipe and only taken to the doctor a week later when a volunteer noticed the open and infected wound.

But enough of the negative side of the story. The good news is that Jairo is now back living with his grandmother, thanks to a little support from Casita Copán. We believe in helping children stay with their families whenever possible, so whenever we found out that Jairo’s grandmother was living nearby, we decided to go and talk to her. The rest was easy. She couldn’t wait for the chance to take Jairo back and to reunite him with his sister, Lea. The only problem was she didn’t have a bed, clothes, money for school fees or enough money for food for the kids. But that’s what we’re here for.

Jairo is now attending Casita Copán’s daycare center after school, which means he’ll have two filling meals a day plus snacks. We’ll also be able to give him some new clothes to get started, and some school supplies to make sure he has everything he needs. Thanks to the furniture we bought earlier in the year, we also gave Jairo’s grandmother a new bed. To help with the transition, we’re going to donate a small package of food each week to the family.

And the best part is, Jairo is incredibly happy. He is finally back with his grandmother and sister, where he tells us he wants to stay forever. The kids at Casita were excited to see him, since many of them remember him from the orphanage. He fit in instantly. And we couldn’t be happier to have him.

Jairo is now looking for a sponsor and you could be that person. He is a truly special young boy who now has a bright future ahead of him. Click here to help Jairo.

PrevPreviousOur New Women’s Program
NextA Look Back on the YearNext